The cost of natural disasters can be counted in many different ways – loss of life, overall economic loss both public and private, insured and uninsured property loss, loss of business revenue, etc. No matter how you count the cost the results are catastrophic.

Initial Japanese media reports indicate the 9.0-magnitude earthquake and tsunami which struck northeast of Tokyo on Friday, March 11, 2011 resulted in a major loss of life, and has caused widespread property damage. Given the severity of Japan’s natural disaster, this quake and its aftermath could emerge as one of the costliest insurance events of the past century. It comes as insurers and reinsurers have in the past 13 months responded to three severe quakes, each of which generated billions of dollars in insured losses (February 2010 in Chile as well as the September 2010 and February 2011 earthquakes in New Zealand). Read more…

The chart below lists the 10 costliest events prior to Japan’s earthquake and tsunami. 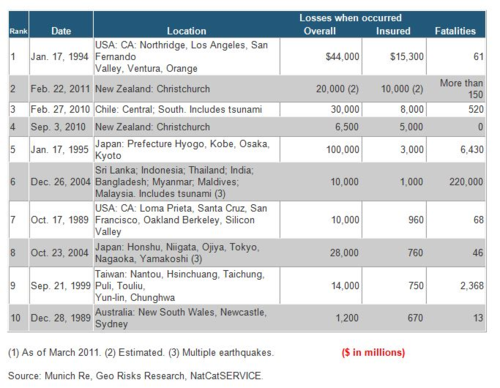