What is driving health care spending? 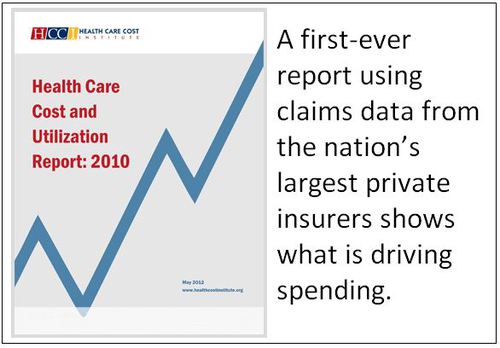 The newly formed Health Care Cost Institute (HCCI) compared data from 2009 to 2010 showing that pure price increases for care rather than increased utilization is driving spending higher.  In fact, the number of hospital inpatient admissions declined (-3.3%) and use of outpatient facilities also declined (-3.1%) in 2010.  But higher prices charged for doctor visits, surgery and drugs pushed overall spending higher by 3.3%.

“For the first time we have comprehensive data on the privately insured. This lets us develop a clearer picture of what is truly driving health care spending in the United States,” says HCCI Governing Board Chairman Martin Gaynor, PhD, E.J. Barone Professor of Economics and Health Policy at Carnegie Mellon University. “Health care spending is a critical problem—it’s not an exaggeration to say that if we solve the health care spending problem we solve our fiscal problems.”

Highlights of the report:

Professional Services. The overall price of professional procedures that include doctor visits, lab tests, and diagnostic imaging, increased 2.6 percent. Payments for office visits—to both primary care and specialist providers—grew by more than 5 percent.