What About Prospect Ave?

The traffic plan for the south end of Prospect Avenue was always dependent on the Roundabout construction plan.  So the closing  of Prospect’s access to Southway and Snake River Ave was a fate sealed long ago.  Intersecting Prospect so close to the Southway/Snake River Ave intersection was always a bit of a driving gamble - so for safety’s sake it was previously limited to right turn only status anyway.  Now, with the construction of the Roundabout the south end of Prospect Ave has been permanently closed and there is no vehicle access to Southway or Snake River Ave directly from Prospect.  However, a nice new sidewalk has been constructed for pedestrians and along with bicycles will continue to have access. 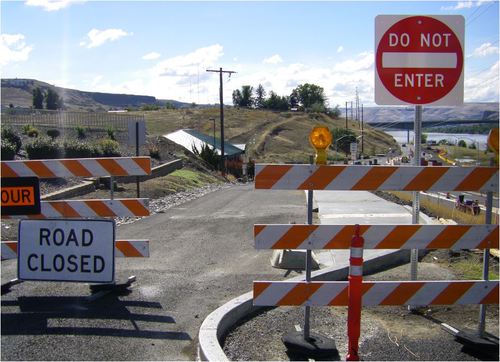 "Do Not Enter" sign at Prospect & 19th Ave looking south.

PROSPECT ROUTE TO SOUTHWAY AVE:
Traveling south on Prospect you will encounter a “DO NOT ENTER” sign and need to turn left (East) on 19th Ave.  Next, turn right onto 1st street for the best access to Southway Ave.  In fact, using 1st street avoids stop signs and is a clear path from all points to access Southway.