Dog bite claims continue to grow in numbers and cost which increases premiums for all Homeowners Insurance. 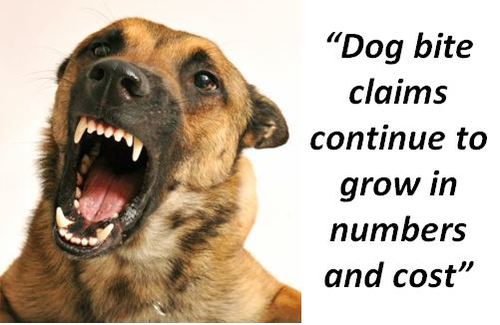 In fact, from 2003 to 2011, the cost of the average dog bite claim increased by 53.4 percent. Dog bites accounted for more than one-third of all homeowners insurance liability claims paid out in 2011, costing nearly $479 million, according to the Insurance Information Institute (I.I.I.).

How to Protect Yourself—And Your Assets
Homeowners and renters insurance policies typically cover dog bite liability as part of the standard policy’s liability coverage, which can range from a limit of $100,000 to $500,000. If the claim exceeds the policy limit, the dog owner is personally responsible for all damages above that amount, including legal expenses. A liability policy also provides no-fault medical coverage in the event a dog bites a friend or neighbor. This allows for minor medical bills to be submitted directly to the homeowner’s insurance company. Homeowners can generally get from $1,000 to $5,000 worth of this coverage under premises medical.

Most insurance companies will insure homeowners with dogs. However, once a dog has bitten someone, your insurance company may charge a higher premium, exclude the dog from coverage, or non-renew your policy. Some companies require dog owners to sign liability waivers for dog bites. Others will cover a pet only if the owner takes the dog to classes aimed at modifying its behavior.

A single lawsuit—even if won by the dog owner who is being sued—can end up costing thousands of dollars in legal fees and lost wages. The greater a person’s assets, the higher the risk of a costly lawsuit. The personal liability coverage available through a standard homeowners may not be enough. Therefore, the I.I.I. advises homeowners to consider purchasing a personal excess liability policy (umbrella) to provide additional liability limit to protect you against personal liabilities, such as dog bites, that could impact a substantial portion of your assets.

Umbrella liability coverage usually ranges from $1 million to $10 million, and covers broad types of liability. Most insurance companies have required minimum amounts of underlying coverage—typically at least $250,000 of protection from your auto policy and $300,000 of protection from your homeowners policy. If you own a boat, you must also have boat insurance with a specified minimum amount of coverage. Personal excess liability insurance is relatively inexpensive. The first $1 million of coverage costs about $150 to $300 per year, the second million about $75, and subsequent increments of $1 million cost about $50 per year.

Understanding Dog Owner Liability
Dog owners don’t realize that they have very few legal defenses if their dog bites anyone – for any reason.  Under tort law the owner of a dog has "absolute liability" for any injury without regard to fault or negligence.  Depending on where the offense occurs there are three kinds of law that impose liability on dog owners; not all the laws apply in every state:

In most states, dog owners are not liable for losses incurred by trespassers who are injured by a dog. However, if a dog owner is considered legally responsible for an injury to a person or property the owner may have to reimburse the injured person for medical bills, lost wages, pain and suffering and property damage.  Some people purchase dogs for the purpose of guarding their homes; however, deadbolt locks and home security systems can be safer burglary deterrents, and can often earn you a discount on your insurance premium, the I.I.I noted.

Bad dog or bad dog owner? Blog what you think below! The link to the KLEW-TV news story about “Chance” is provided here. http://www.klewtv.com/news/local/Pitbull-mix-attacks-neighbor-and-police-officer-161920935.html

Thank you for sharing. Not to many people in your position are so gracious. Your article was very poignant and understandable. It helped me to understand very clearly. Thank you for your help.
HTTP://www.CoolMobilePhone.net

I was attacked by a dog chained up outside a library, my husband called the police and the police did not even take the owners name,, I was so shocked and was not hurt physicaly becasue it grabbed my hand bag,but I will never walk past a tied up dog again.. How do you know if the dog is an attacker??? It does not have a note attached to it. Nor does the owner own up to it. Crazy laws!